The spinning red white and blue of a barber pole is as American as apple pie, or the melody of the national anthem, or hot dogs, or denim. By which we mean absolutely none of those things began on these shores.

In fact, that iconic image of the craft of barbering started on the other side of the pond, hundreds of years before even the Vikings found their way to these western shores, and is pretty gory. As is this dive into the history of bloodletting and barbers.

A BIT OF BARBER HISTORY

If you close your eyes and think of a classic barbershop, you might dream of hot towels, neatly tapered haircuts, and that warm lather whisked off your neck by a razor blade. These are the cozy cornerstones of that ol’ timey experience kept alive in little shops in every corner of the world.

Thankfully, there are a few original barbering services your local beard grooming expert might shy away from, those invasive, messy, and slightly macabre services of ye olde barber surgeon.

“File:Female barber surgeons bloodletting from a patient’s foot Wellcome L0014281.jpg” is licensed under CC BY 4.0

Long, long ago, your friendly neighborhood barber was also your doctor and your dentist. You could pop in the chair and freshen up with a quick shave, a trim on the sides, and some minor surgery (though it may cost a bit more than two bits). If you were feeling under the weather, what with the influenza and black plague adrift in the air, you might stop in for that most infamous of barber services, that good old-fashioned cure for what ails ye: a wee bit of bloodletting.

If you’ve somehow missed the memo, bloodletting is a process where a little (or a lot) of your blood is drained out of your veins, for reasons. While bloodletting is remembered in a very intense way in recent media, the task itself was as common a practice as standard blood work is today, and its origin lies as far back as the history of civilization.

BLOODLETTING: BUT WHY THO?

The roots of the procedure of bloodletting lie shrouded deep in the mists of world history. It’s considered to be one of the oldest medicinal practices, with some of the first examples of bloodletting found around 3000 years ago in Egypt and Greece.

Early physicians based their medicine around bodily fluids, singling out four specific icky liquids that were somehow the cause of all ailments:  black bile, yellow bile, phlegm, and blood. This foul foursome was known as the four humors. Keeping the humors in a perfect balance was apparently the key to perfect health. If you had a fever or a migraine or maybe just felt kinda “eh”, your humors might be, as the kids say, all out of whack. 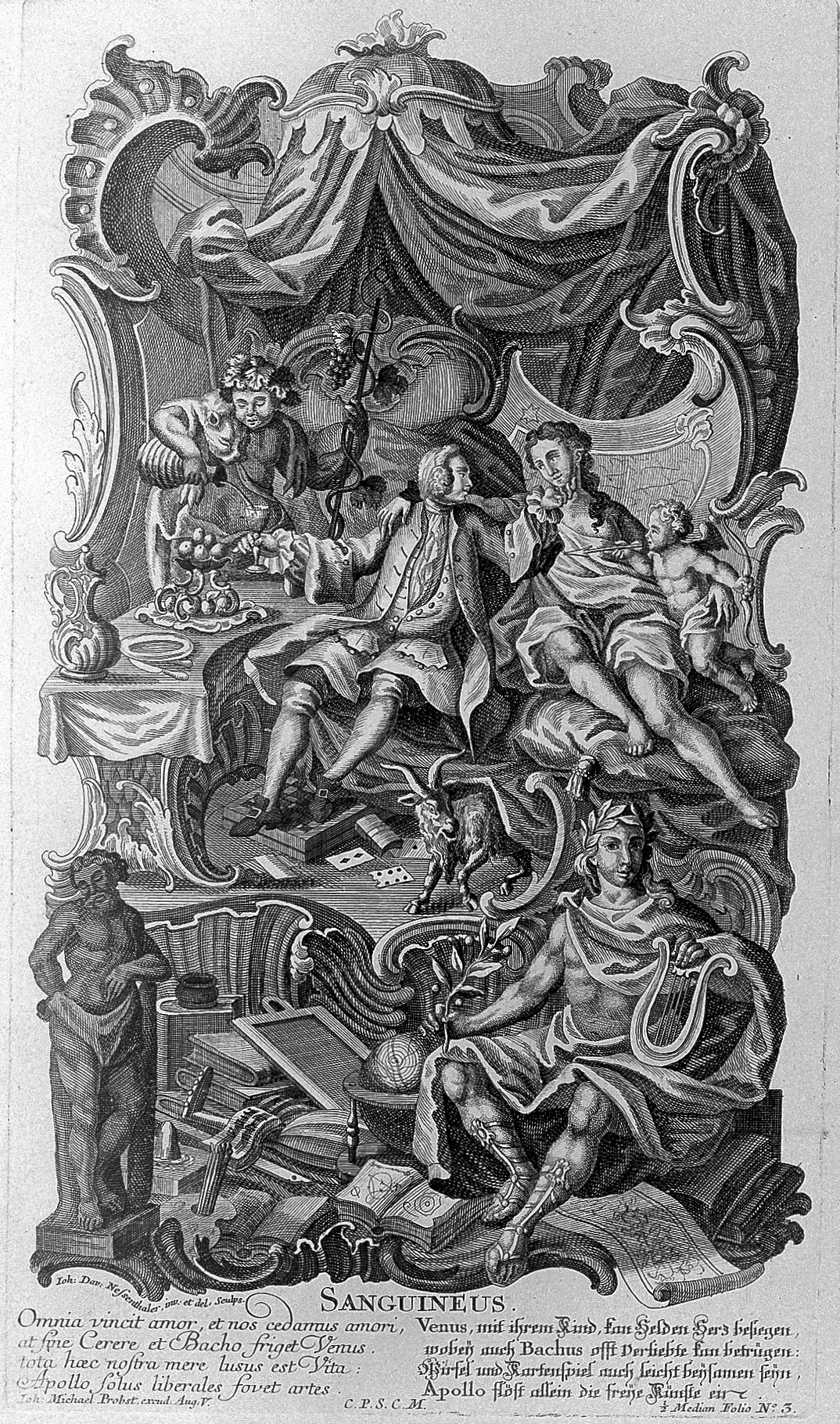 “File:Temperaments formed by the four humours; sanguine Wellcome L0012568.jpg” is licensed under CC BY 4.0

Bloodletting made its way to western Europe by way of the Roman Empire, where it became the standard treatment for just about everything. Tickle in the throat? Too much blood. Small cough? Let’s drain one of these veins. Haunted by demons in your kidneys? Break out the razors, it’s bloodletting time. It was such a common and popular practice that patients needed stern convincing not to be bled for minor medical inconveniences as late as the 1870’s.

The practice of bloodletting wasn’t always the responsibility of hair care professionals. In England and France, a patient in need of medical services, or maybe just a little less blood in their bodies, would trek to their local church or monastery for medical services.

The church remained Minute Clinic of the early times until 1163, when Pope Alexander III drafted a papal decree that men of the cloth couldn’t shed blood. The local rabble, filled to bursting with blood and bile, were at a loss on where to go for aches, pains, and unsavory issues.  Luckily, professional razor wielders were close by to pick up the slack.

It was common practice in Roman Catholic places of worship to keep a barber on hand in order to maintain the tonsure, the reverse bald fade that became the slightly dorky signature of the clergy. 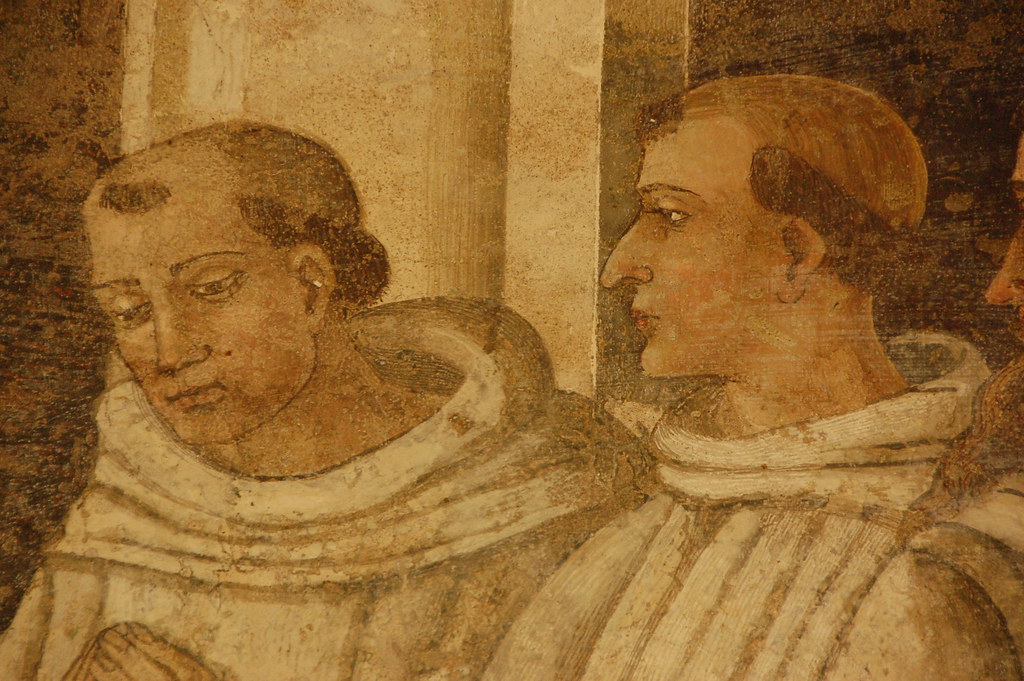 Since there were already barbers nearby with a handy selection of sharp tools and strong stomachs, abundantly bloody patients could traipse on over to the barber’s chair, rather than the church pew, for their regular fluid balancing. And while they were there, they might need a routine amputation or a tooth yanking… then perhaps a shave for the gentleman?

Barbers became the fellas to go to when you weren’t feeling right. They were especially welcome sights during the period of bubonic plague, where a common treatment was the removal of a bunch of that gross, plague-y “bad blood” so that more, slightly better blood could materialize and pump up through the veins.

Some barbers eschewed the stationary office and took their shops on the road, whom the townsfolk referred to as flying barbers. These traveling tonsorial talents would set up shop in plague-ridden towns and offer their blood removal services. It’s unclear whether or not this helped fight the bubonic menace.

The actual process was a little less “Sweeney Todd” than pop culture might make it out to be, though still a bit questionable (and certainly not recommended). The patient would sit in the barber chair and receive either a small prick or a good slash on the forearm or neck, draining out the “proper” of gore into a bucket for a decent amount of time. The discerning barber might pop a couple of leeches on a wound if the bad blood needed a little coaxing.

Barbers would offer bloodletting services off-and-on until the 1700’s, when barbers in France were banned from performing actual surgery. Bloodletting was still offered at the local barbershops, but with the swanky new College of Surgeons in London, most people began to separate their hirsute needs from their medical ones.

YE GODS, WHEN DID IT END?

The medical practice gradually fell to the wayside for barbers, who began to dedicate more of their time to perfecting their trade in hirsute pursuits. Physicians picked up the mantle on phlebotomy.

By the end of the 1700’s, surgeons with a bit of status began to move away from the practice, though they’d keep bloodletting on the menu for the higher-profile clients. Among the names of bloodlet celebs is George Washington, who received bloodletting treatments as late as 1799, although a particularly long bloodletting session was likely the cause of his death.

Modern-day phlebotomy looks quite different: for one thing, four fluids aren’t the assumed cause of every illness; for another, it’s become generally good manners to put some blood back in if you’re going to take some out.

As for the haircutters through history, barbers have become much more considerate coiffeurs, taking great pains to assure that all of their clients’ blood stays on the inside, where it belongs.

The memory of the barber surgeon, however, lives on in the colors of the barber pole: red for the arterial blood, blue for the veins, and white for the washed bandages that would wrap around the pole in the breeze to dry before being used on the next patient. The Beardsgaards are a pair of mom-and-pop barber nerds with a shared obsession with perfection. We built this old school barbershop to feel like home to everyone who enters beneath the Elvish script above our door. If we and the Gaardian army can give you a better handle on your grooming routine, all the better.

We built this place for you, to bring you everything you ever dreamed you could find in your friendly neighborhood barbershop, and a stupid amount more. Beardsmith and Blademaiden, the mom and pop founders, invite you to explore the realm.

Vaccination confirmation is required to remove masks, for services or otherwise. See full details here
You May not have any luck this month, look ahead to June here
Masks required to enter the shop, regardless of vaccination status!
Shop our entire shop online, for shipping worldwide or curbside pickup! {CLICKY HERE}